The Purity Knife: Sex, Death and Human Trafficking in the Unification Church

The distinct "ping" of an incoming email on my phone jogged me from my reverie one evening after work. Out of habit I palmed my phone and thumbed through to see the newest delivery.

My curiosity piqued, I opened the message to see what it could possibly be about.

In brief, I was being asked to speak to a journalist on the issue of human trafficking and indentured servitude in the church.

"That was thing?" I wondered, and began to type my response: "Sorry, not sure I have any kind of experiences that relate to that," I began.

Then I paused for a moment. A little spark went off in the back of my brain, and I held it there to examine where it was trying to shed light in the dark cache of my buried memories.

Frowning, I tapped out an erratic rhythm on the delete button.

I began again: "Not sure this is what you're looking for, but I did do STF."

STF was the acronym for Special Task Force (named with the intention of evoking the elite army-unit association), a near-compulsory "leadership training" program that the church tried to institute at the turn of the century.

It was part of a larger program for second generation who had graduated high school, called the Seven Year Course.

The first year of the program consisted of living in a van and fundraising 18+ hours a day while traveling across the country. We were discouraged to ask where the money we handed over each evening went.

Like many of my comrades on STF, I only lasted a handful of months before needing serious medical attention. When I arrived home I spent two bedridden weeks on heavy medication.

In those days of recovery, it felt as though lead coursed through my veins. My body felt too heavy to move. "I wonder if this is what it feels like to die," I would think in my antibiotic-addled haze.

By the time I recovered enough to go back, I began to have panic attacks. I would sob for hours on end, curled up in a ball in my room awash with guilt. "I don't want to go back," I half confessed and begged to my mother. "Please don't make me go back." She didn't.

Others' knees or backs gave out from the days on end of carrying backpacks burdened with product to sell among neighborhood cul-de-sacs and along city highways.

But our injuries were hardly the worst casualties of those long months. It was the slow death of ourselves and, in some cases, the actual loss of life that we experienced that was the worst tragedy.

Living on cheap fast food, getting four hours of sleep a night, constant praying, chanting and force feeding ourselves feeble theological rhetoric began to chip away at the core of who we were.

One afternoon, a young woman of our ranks wandered into a city apartment complex alone. Carrying hundreds of dollars on her person and a backpack of product, she believed that anyone who purchased or donated was setting a condition to be saved by God and Rev. Moon.

Hours later, when she failed to rendezvous at the appointed place, her absence was noticed by her fundraising team.

The media found out what had happened before we did.

As I stared at my unfinished email to the reporter, I thought back to an essay I had written about that day called The Purity Knife, which was published on my photography blog last year:


I walked into a barbershop and began my sales spiel. "Hi sir, I'm fundraising for my church's youth group and -"

The gentleman at the front counter stopped me mid-sentence. "Are you with the Moonies?"

I paused, trying to gauge how I should answer. My heart always jumped at the question, remembering my parents' stories of first generation members being physically threatened, jailed or kidnapped. But, I knew that if I lied I might allow 'Satan to invade.'

"Yes," I answered, hoping that God would protect me for telling the truth.

"Oh shit," he said, shaking his head. "Awww shit; I'm sorry for your loss," he said again with a humane empathy that I rarely encountered when people discovered my affiliation. We were usually cursed at, or thrown out of an establishment, but he didn't make a move to do either.

My confusion must have shown on my face.

He grabbed a remote from the counter, turned the channel on the television to the local news, watching my reaction as the pictures on the screen sunk in. What I saw there defied everything I had ever been taught.

In a monotonous voice the news anchor reported that just a few short miles away another fundraiser, a girl I had considered to be a sister, had been lured into an apartment, sexually assaulted, killed and robbed.

A wave of shock overtook me. I thanked the man in a daze, backing slowly out of the barber shop and fled down the highway of the strange city. Every passing car suddenly sounded like a threat.

We had been taught that we were special, that God would protect us while we were doing His work. How could something like have happened?

I found my way into a local McDonalds and, sobbing, asked to see the manager and borrow the phone. Patrons kindly left their meals to come over and comfort me, but I was wild with fear and could barely speak coherently while I dialed home.

My parents answered and took in my story as I choked out the words. The respondent silence on the line was deafening. Their world had just ruptured a little bit too and they had nothing of comfort that they could offer.

Shortly after that day, hundreds of young people convened for a workshop where leaders did damage control and praised the young woman for being such a pure sacrifice to God and True Parents. Initially leadership denied that she had been sexually assaulted, presumably to keep parents from reacting and removing their children from STF.

Later, when enough news reports were out and had confirmed that undeniable truth, "mediums" claimed that she was "separated from her body very quickly as a way to protect her from pain. She was allowed to escape the trauma of what happened to her to a very large degree."

Leadership encouraged parents not to take their children home, otherwise Satan would be able to claim victory after the tragedy and, publicly, the young woman was given something akin to sainthood.

But privately it was whispered that she had been struggling with her arranged marriage. How else could she have been "opened for attack from Satan"?

As we prepared to go back out into the streets to fundraise, the young women were each armed with a personal alarm and mace. A few sisters said that their mothers had given them Purity Knives, and that all of the mothers should have given one to their daughters.

This ideological relic comes from the old Korean tradition where young of women of high birth wore a knife and were "expected to commit suicide to ‘protect’ their virginity, as opposed to using the knife to defend themselves."

While giving out these purity knives was never an official church custom, Moon did recommend that members carry "a knife to kill yourself before you will be violated" because it was a theological belief that losing one's purity was far worse even than dying.

Moon had said that "Women should always carry a small pistol or razor blade to protect lineage and sexual organ" and that "if you are assaulted, you should either kill yourself or stab the attacker in the stomach with a knife." 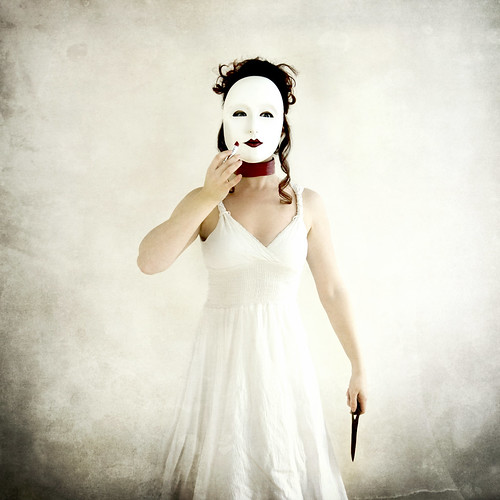 I took a few minutes to re-read the essay while my email to the reporter sat unfinished.

Until receiving that email, I had never thought of my experience as trafficking. It was just something that we were expected to do growing up.

To not go on STF was to jeopardize our chances of being accepted by the community and ultimately marrying well in the church. But as a young teen I had never thought of it as coercion or an abuse of power, despite the fact I truly feared the consequences of not cooperating.

I stared long and hard at my screen.

My teeth began to grind and fear welled up in my throat as I stabbed at the delete key once again.

Then I hit Send.

--
For more on human trafficking in the Unification Church, see this post by How Well Do You Know Your Moon: http://howwelldoyouknowyourmoon.tumblr.com/post/3234987836/human-trafficking
Posted by Jen Kiaba at 5:06 PM