My mother is dying.

After a few years in remission, her breast cancer tore free from its slumbering cocoon and bled into her spine, riding the expressway throughout her body and settling everywhere and dotting her scans with warnings.
There is no cure for cancer of the spine, only palliative care is offered so that you're more comfortable puking with unbearable migraines while you slowly die.

She phoned the other day and informed me (days late) that she'd begun oral chemotherapy, because bad news is better festered - like the time it took her three days to email me that my grandmother had passed away.

If death has to take her before she is sixty I wish that life had at least bestowed her with happiness, security, and fortune. However, much like her mother before her, she never got the love or care she deserved. 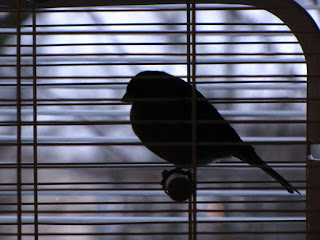 As a tiny girl she was sexually molested by a friend of my grandparents. As a teen she blew away her absent mom and critical dad with lines of coke. When her alcoholic fiancé passed away she turned to the Catholic Church, worked in an orphanage in Mexico, and eventually found Reverend Sun Myung Moon's Unification Church.

Her life until I was old enough to be cognizant is mostly photographs or bullet points in my mind. I know that while fundraising/trying to start a Unification Church center with a friend in West Virginia, she contracted Lyme's disease, which was left untreated due to living out of a van and trying to earn money for a fat Korean billionaire.
When it developed into Bell's Palsy, church leaders had convinced her that her faith in God and in the "messiah" Reverend Moon was faltering, her paralyzed face and body was the result of evil spirits attacking her - instead of negligence and manipulation.

My parents were matched by Reverend Moon whose stubby fingers directed the will of God like a divine laser. Later they were married in the July 1st 1982 mass wedding at Madison Square Garden. My father was disappointed, as like many western men in the church he wanted an Asian wife. My mother was also reticent as red flags about my fathers schizophrenic and Asperger-like behavior tendencies loomed towards mental abuse.
There are no official wedding photographs of my parents. My father had the chicken pox on the day of the wedding. God's divine laser cast a pox upon the match, which plagued all of us even as the scabs faded.

To be fruitful and multiply is standard practice amongst most major religions even if they haven't stemmed from a sex cult. My family was no exception as there was eventually five of us. My father had no real interest in children, keeping an office to himself in the basement only to emerge for meals, to beat one of us with a belt for crying or being too loud, or to hit, criticize, or gaslight my mother. However, my mother said we were the best thing to ever happen to her.

As a small child living in rural Virginia, we were away from the Washington DC church community. It was then that I deemed that being married meant loneliness. My father often stayed in DC for his employment in the church, or he slept on the pull out couch in the basement.
I remember my mom laying in pain on their large bed, bleeding out a miscarriage and wearing a cerulean t shirt with an iron-on t shirt transfer of kittens. I watched my sister tend to her with a hot water bottle and I realized my mom didn't have any friends.
It was always her and us. At home or on vacation, after school or during summer she was always present for her children but isolated from the outside world.

She isolated herself from the concept of self care, never allowing herself nice clothes or haircuts beyond the services of the $20 mall salons. "Live for the sake of others". She revoked her financial responsibilities to my father who handled the taxes, the bills, and managed to put credit cards and utilities in her name which went unpaid and eventually trashed her credit.

Through radiation and chemo my mom still tried to trek through her first battle with cancer, cooking dinner and doing laundry because it was her duty - but mostly because no one offered to help. My father mentally checked out, buying himself new laptops and phones to distract himself By the time my uncle flew up from Mexico to become her caretaker, my sister and I were burnt out on splitting the duties of motherhood on top of working and going to college full time. But the men in the family never stepped up, Moonie patriarchy dictates the role of domestic responsibilities falls to women.

Like fatherhood care taking duties, my dad took a back seat to attending to my mothers illness. Towards the end of our phone conversation a few days ago she mentioned that my father has reprimanded her for being too tired to cook dinner. Care taking was a woman's job so he and the two brothers who still live at home were not explicitly inclined to take equal weight of responsibility, and my father had been fine with his mom taking care of him for years. My parental grandmother paid our rent so he could freelance low paying jobs within the Unification Church. She bought him brand new cars so his money could go towards whatever new toy apple happened to produce. She paid off $100,000 of his student loans so he could cleanly inherit her money, while my own mother often borrowed money from us for groceries.

"How far back would I have to go to set things right?" she'd ask when I'd rail against her neglectful marriage. She doesn't expect Jesus to high-five her for bearing through life's hardships when she does pass on, but it is almost a sense of defeat and desolation than religious obligation that keeps her where she is. We just need to let go of the train and watch it hurtle down the tracks toward the cliff. After all, what could be done to change anything now? A miracle or a million dollars would be too little too late and we can't see beyond the tragic ending to a sad story.

"It is where the loneliness of life has led us."