Across from my restaurant job was a Duane Reade, during break I walked across the street and spent the last $3 of my EBT funds to buy a microwavable Progresso soup that I ended up just drinking straight out of the container. Outside, I propped myself against a concrete planter, disregarding the fact that very spot probably had been christened with dog piss over the years. I settled down and stared at my phone again. I hadn't spoken to my mother in months, but she had texted me while I was at work to inform me Reverend Sun Myung Moon had passed away.

I kept staring at the phone screen waiting to feel something. As a child, I had imagined that the world would dramatically change when 'True Father' passed away. As if buildings would crumble and the Earth would shake, but it didn't. He was just a man, and he had no power over me anymore. 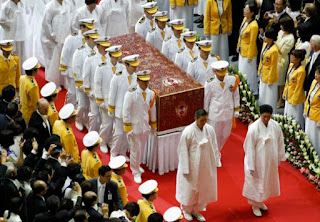 At least, that's what I kept telling myself. I wanted to not owe him anything, but the truth is that if he hadn't flicked his hand in the general direction of my mother and father during the matching process, my siblings and I would have never existed. It didn't matter how much thought he had put into the match (probably none at all,) but it was at his discretion that I came to be in this world. And for that, I hated him.

My mother used to exalt us with how we were amazing miracles, children born of a pure blood lineage and that we were each unique, extraordinary beings, destined for great things.

My teen years were a testament to how un-extraordinary I was, as outside the church-world I felt I had no value. Outsiders didn't praise and recognize how 'phenomenal' of a being I was, because I knew nothing about the world outside the church-bubble and expression of personal ambitions, talent, and perspective was all very much discouraged, especially for girls. The longer I questioned the validity of every truth and value I was raised with, the more I realized I had a disadvantage in comparison with everyone else in the world. I would have to break free from everything I knew and learn how the world really functioned, starting all over at sixteen. I would have to relearn how to socialize with people, how to drive, how to do my taxes, and ultimately how to value myself outside the defining variables of the Unification Church (it's become an ongoing process.)

For years I blamed Reverend Moon for everything I've ever been through. I blamed him for the verbal, mental, and physical abuse my father lashed out at us. I blamed him for having two financially ignorant parents who couldn't hold down a job or a place to live for more than two years. I blamed him for the unstable toxic environment which we were raised, waking up and going to sleep to the sounds of my parents screaming at each other, or the nights when it was my turn to rock one of my baby brothers back to sleep since my mother's depression kept her bed-bound. I hated him for the horrific summer we spent moving from Arizona to Bridgeport, Connecticut, and having to deal with the tension of my mother trying to accuse my father of sexually molesting us by slipping a note into his briefcase.
I hated Reverend Moon for the year I spent among his 'blessed children', dealing with alienation and ridicule from peers at New Eden Academy. I hated him for the summer we spent being homeless, living mostly out of the navy Mercury Villager mini-van our Grandfather bought us, crashing with my mother's friends in Yonkers, or motel hopping in the Hudson Valley. I hate him for how church members scorned us when we arrived in Barrytown, looking for help from the community, only to be treated like lepers for having a broken family. I hated him for the years I spent destroying myself inside for losing my virginity at sixteen (a.k.a. falling in Moonie-speak,) only to learn that attraction to boys and having sex as a teenager is a completely normal thing. I blamed him for turning out so fucked up that at 26 I'm taking baby steps to take control of my life, and to come to grips with clinical depression that has had me by the throat since fourteen.

I hated him for being born. It was by the point of his fingertips that I came into being, and had to deal with every hardship in my life. If he had just picked another husband or wife for my parents, I would still be matter and energy out in the universe, free of responsibility and life.

An acquaintance of mine from Moonie summer camp posted on her Facebook the day Reverend Moon died; "You were a beautiful soul. RIP."
I wanted to flip a table.
Later when she clarified what she meant, she expressed that while she was no longer a member of the Unification Church, she had to credit Reverend Moon for all the crazy good things that happened in her life and for that she was grateful. Clearly, everyone has a different experience.

Eventually my half hour break was over, and I picked myself up off the concrete and headed back to my job. He had 'ascended' but I remain, steering the wheel my life. I can't blame him for where I go from here.
Posted by Lani Barry at 6:54 AM